How well-traveled are you? Introducing the t-index

It’s a common game, particularly among backpackers, to compare how many countries they have visited. Of course, it’s all a bit silly, as the traveling shouldn’t be about totting up numbers of places, but enhancing one’s life with experiences. Nevertheless, it is a good exercise to keep record of the travels. And the more noble pursuit of personal life experiences is still enhanced if some thing comes out of the roaming, such as souvenirs, photographs, or writing, or even the simple summary of one’s travels by calculating the total. It’s nice to have some sort of product from the experiences. And really, it’s still quite a positive thing to compare travel stories with friends, even if it contains a bit of one-upmanship. The problem can be that it encourages rather shallow traveling, such as visiting places just to say one has been there. Round-the-world packages are a good example of that: rushing in lots of travel, without having to organize it yourself, or spend more than a few days anywhere, is not real travel. As an aside, I’d say that my wife, Helen, is a good example of real round-the-world tripping, as she ended up doing it out of circumstance rather than posturing. We were traveling from Japan to Hawaii, but she had a death in the family and had to fly back to the UK on short notice. After the funeral, she joined me in Hawaii via the USA, from there we returned to Japan. She circumnavigated the globe in those three weeks.

That some people simply collect visits is proven by the fact that there are ‘speed travelers’ out there. One famous such traveler is World Record holder Indy Nelson, who visited all 193 sovereign countries plus two others (Taiwan and the Vatican) in a trip lasting 17 months and 7 days. Undoubtedly a major achievement, but it breaks down to less than 3 days in each country, averaged over the entire trip. Hardly enough time to really experience and learn from the individual places. Arguably, there are people who have traveled in substantially more depth, and developed more as people, with far smaller ‘total countries visited’ tallies. This is a photo of Indy Nelson, super speed traveler. 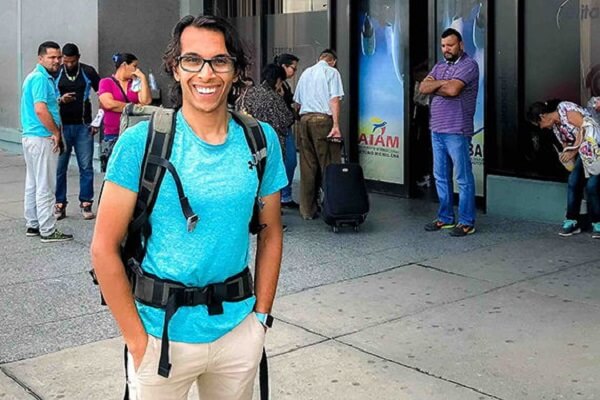 As both an academic and traveler, I noticed that we have the same phenomenon in academia, that is the trade off of quality and quantity in search of reputation. As academics we are judged to a large extent on the publications we produce, and these too, are generally reduced to simple numbers for inter-personal comparison. There are two broad strategies employed. Some academics focus on high-quality, high-impact research, that may only produce a smallish number of published articles, an honorable strategy known as ‘slow science’. These researchers may only publish a few works in their whole career. In contrast, some people realize/think that the one can get a good reputation with quantity over quality. There are (notorious) people in my field, Psychology, who publish articles at a dizzying rate as fast as of one every two days. Of course, such a fast turnover produces a lot of crappy research.

The quantity of papers published does give a broad idea of a researcher’s mettle. But so does the quality. As this is so subjective, people often take another simple metric as a quality measure: how often the research has been cited by other people (i.e., how often it appears in the reference lists of other papers). As an example, I’ve published over 60 papers, some highly cited, and some rarely cited. To combine both the quantity and the quality of research output, we use the h-index. This is the highest number of publications an author has that is at least matched by the number of citations. So, my h-index on Google Scholar is currently 20, meaning I have 20 papers that have all been cited at least 20 times.

I’ll calculate my own t-index as a guided example.

1. create an Excel file that contains all the countries you have ever visited. Your home/birth country doesn’t count. I found it easier to look at Google Maps, and go over each continent in turn, so I added a column for that, but it’s not necessary for the t-index calculation. Also, add a column called ‘Count’, but don’t add anything to it yet.

2. Now count, or best estimate from memory, how many nights spent in each country. I decided to use nights, rather than days, as I don’t really count a country as visited if you are just there on a day trip, or in transit. My personal system is to only count countries as visited if I’ve spent at least two nights there. If you have visited the same country several times, calculate the total for all visits. Add the number to the column ‘Nights’. 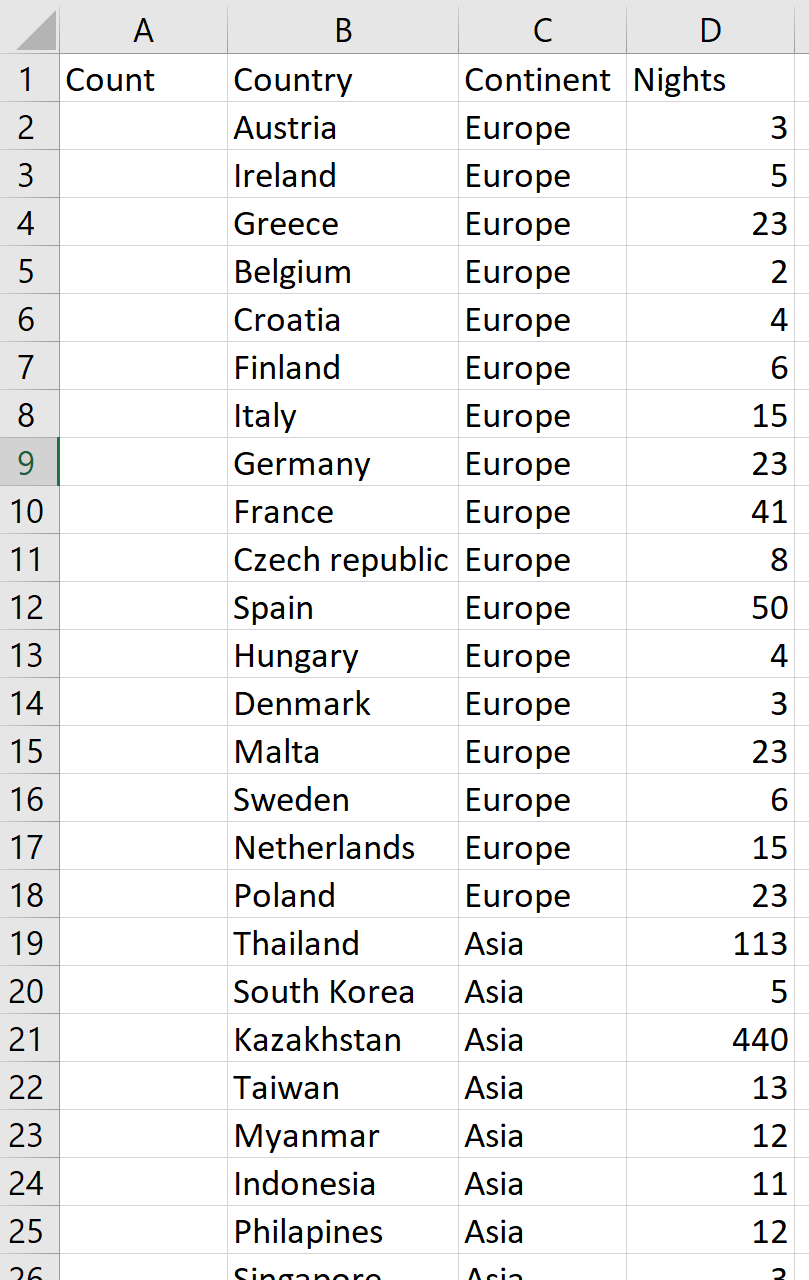 3. Select the whole sheet and use the Sort function in Excel to rank the places visited for nights spent there, from highest to lowest. So, for me, Ecuador has the highest number, as I lived there for several years. At the bottom of that data are countries that I only ever spent two nights in (Botswana and El Salvador). 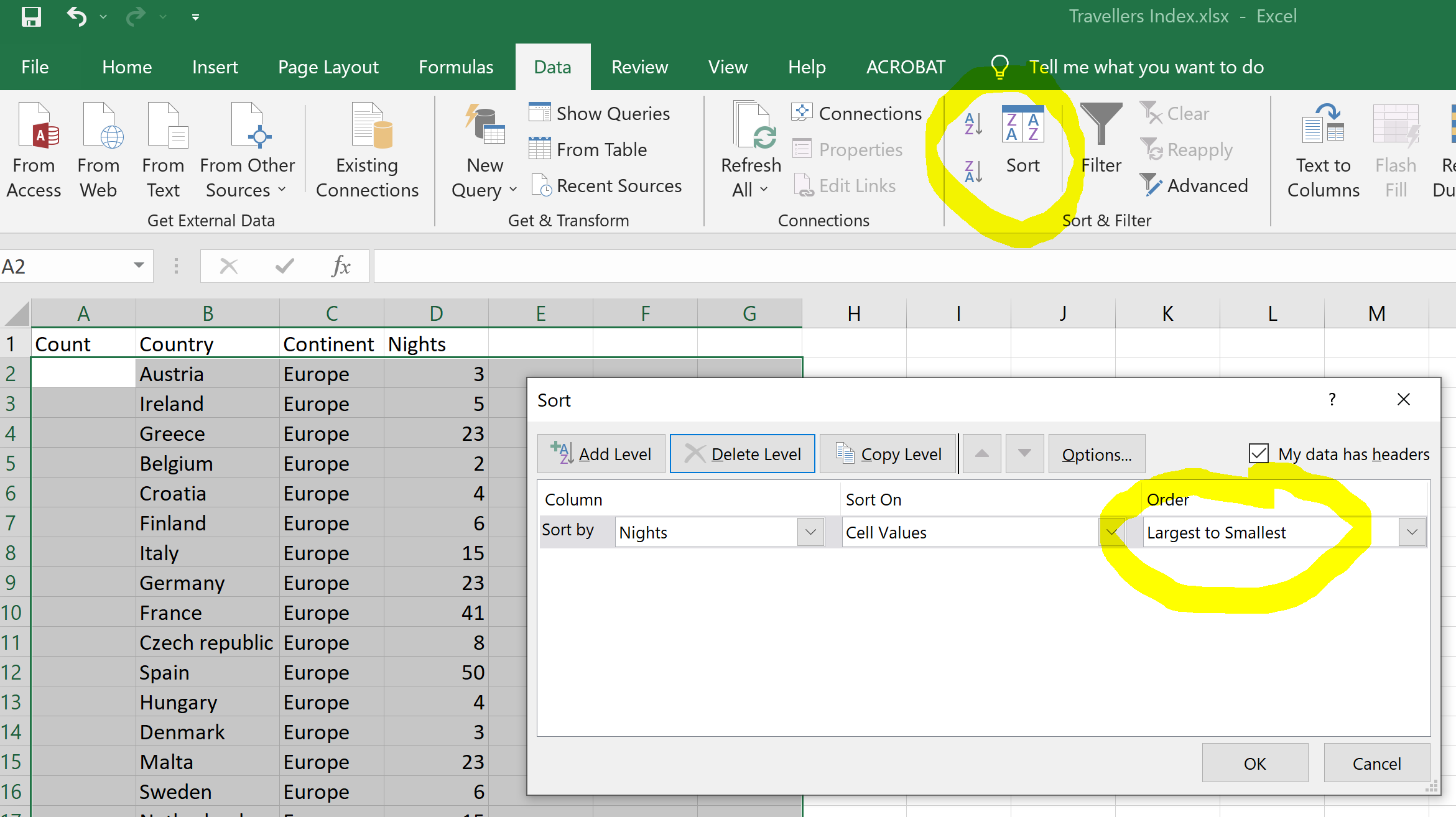 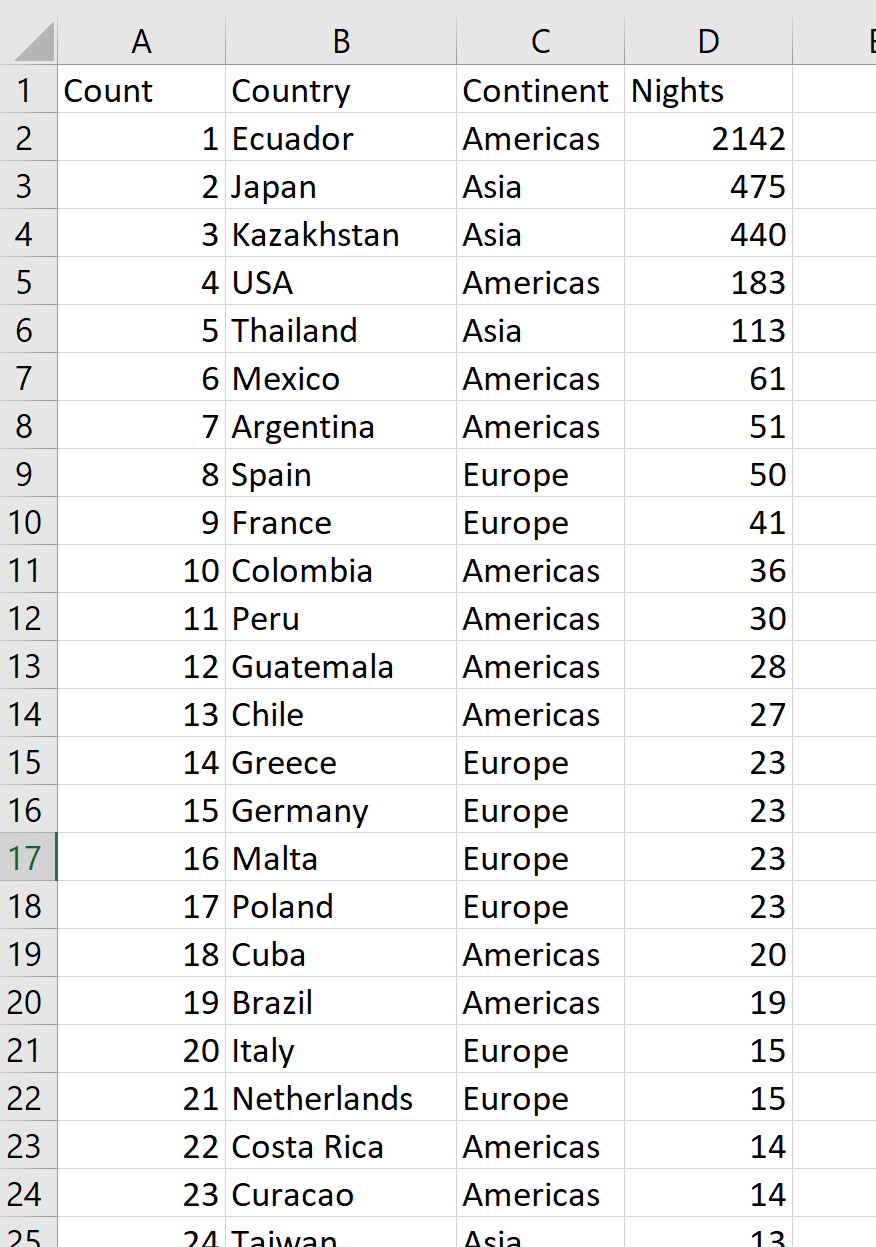 5. To find your t-index, look for the highest number in the Count column, for which the number of nights is equal or greater. As example, my t-index is 19, as there are 19 countries that I have spent at least 19 nights in. My t-index will only increase if I go and spend at least 20 nights in a new country, or bring one of my other totals up. So, spending 5 nights in Italy would bring that night score to 20, and my t-index would increase to 20. Why not calculate your own, and post a comment to this blog post?

This t-index, of course, is a very limited score. Like the academic h-index, it attempts to combine quantity and quality into a single number, and thus loses most of the information in that crush. But on the other hand, like the h-index, it might make people who are tempted to focus too much on quantity, to reconsider.

In, and out of, quarantine »
« Back to conferencing